When we left Hatchet Bay, we were headed for Governors Harbour.  We decided en route, due to the slightly uncomfortable sea state, that we would cut the passage short and anchor in Alabaster Bay.  This ended up being a great choice!  This bay is gorgeous!  The beach is miles long and the beach combing fruitful.  There were 2 other boats when we came in and the catamaran was gone the next day. 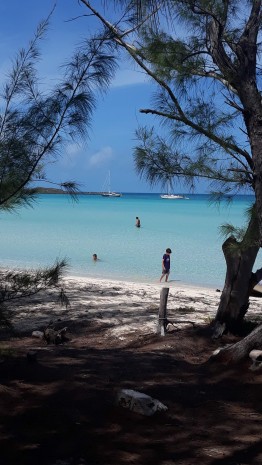 We were able to easily get the dogs to shore, watching when the other boaters had their dogs ashore.  There was also some ruins to explore on the beach and plenty of trees for hanging our hammocks.  A US Navy base was a mile and a half down the road and we walked there to explore.  There are old barracks, gas station, brig, store, absolutely everything that a small base would require.  And it was abandoned.  It turns out that this base played a major role in the Cuban Missile Crisis.  The base was formed to “listen” to submarines off shore in the Atlantic.  It was initially an experimental sight, that ended up being exactly what worked to divert catastrophe. 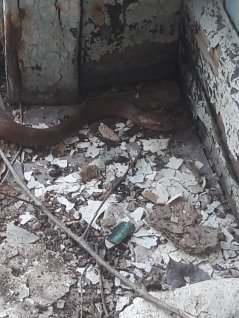 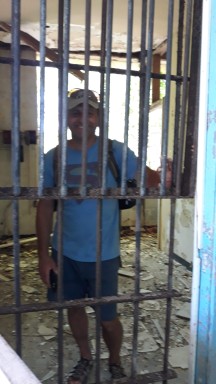 Jeff and Jennifer rented a car for 2 days.  While they had the car, we were able to explore both ends of Eleuthera.  The first day with the car, we went to Governors Harbour and explored the Ruins of Club Med.  What a place this must have been!  A lot of the buildings are gone, but the pools (with resident ducks), daycare, tennis courts, basketball courts and courtyard  remain.  Every time we tour one of these ruins, it leads to investigation of the site.  I’m always left wondering how these places can just be walked away from.  There were documents here, plans for the future, financial logs, etc.  And they are left, to mold and blow away in the next wind. 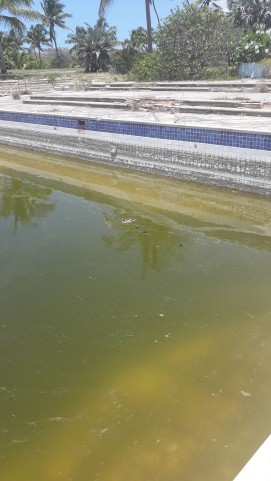 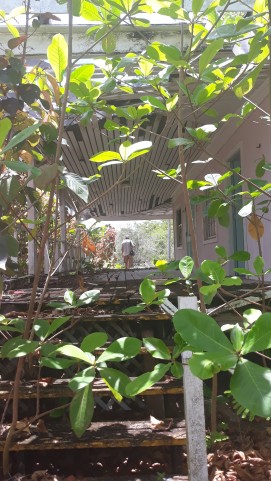 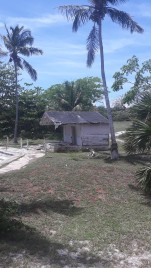 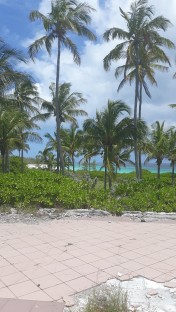 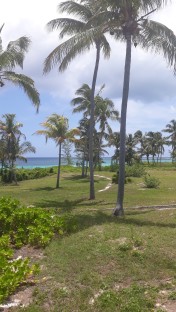 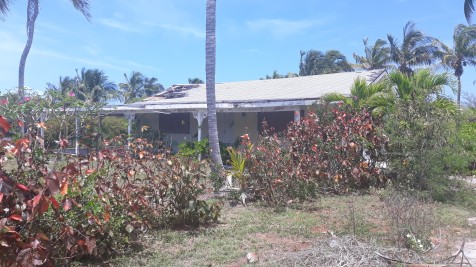 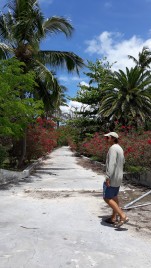 After Club Med, we ate lunch at Buccaneers and ventured further south and found church ruins at Bannerman Town and Lighthouse Beach.  This, my friends, is the most beautiful, secluded beach I’ve ever laid eyes on!!  Now, before you hop in your Chrysler and head out there, be forewarned that the road is questionable.  It’s a good thing the Savori’s rented a Jeep, that’s all I’m saying. 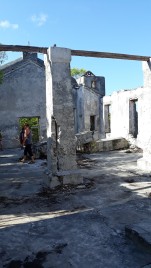 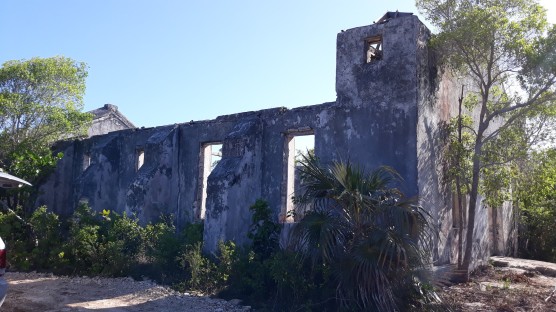 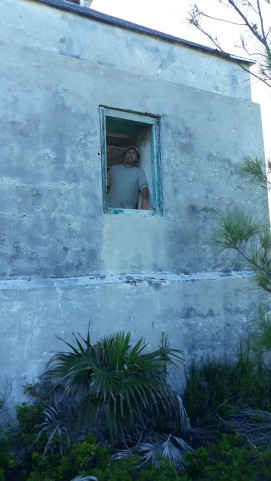 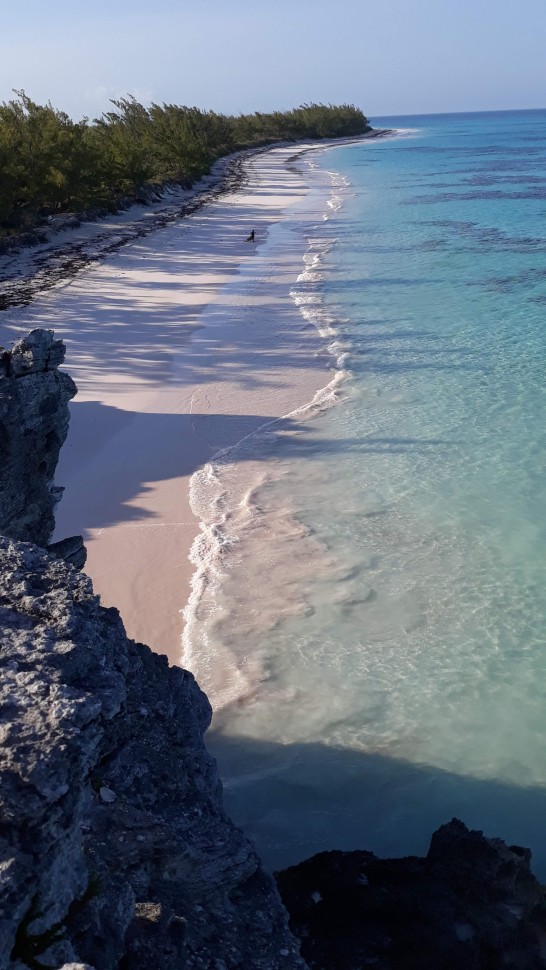 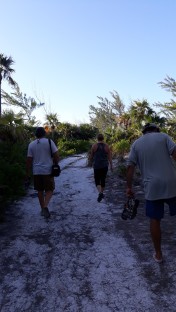 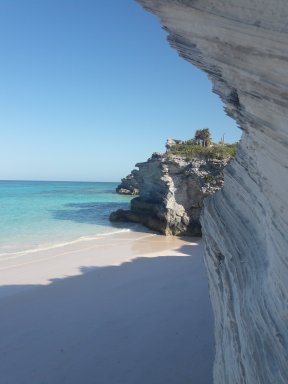 Day 2 of the car rental took us north.  We ate at an absolutely amazing restaurant along the way that had the best local cuisine.  It was called Island Something or other and was in Bluff, along the main road.  I had Curry chicken and it was delicious!  There are only a few items on the menu, but they are made to perfection.  Matthew had wings.  When I asked if she had BBQ sauce for them (when he ordered) she said no, but offered to make some~ and she did.  It was sooo good!  Also, when here, don’t trust the bathroom lock…..

We stopped at the Queens Bath just before the Glass Window Bridge.  This is something special.  There are several small pools and caves that fill with water depending on the sea state and tides.  The water varies in temperature and depth per pool.

We continued up the road to Preacher’s Cave, stopping first at the Sapphire Blue Hole.  This is a salt water pool that is approximately 60 feet deep.  “Blue holes are typically found on shallow carbonate platforms, exemplified by the Bahama Banks…..” (Wikipedia).  It is a sinkhole originating from a limestone cave.  Regardless of how it’s formed, these holes are beautiful and fun.  When we stopped, there was another family there.  Two sons and the mom had made the 30 foot leap into the pool.  We didn’t really talk about jumping, but before we knew it, Matthew had taken off his flip flops and handed his dad his shirt and was preparing to jump.  Mike just had time to turn on his phone and record it! 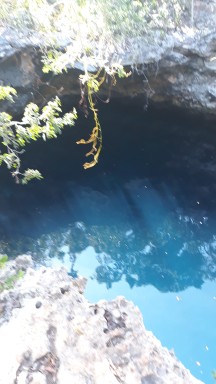 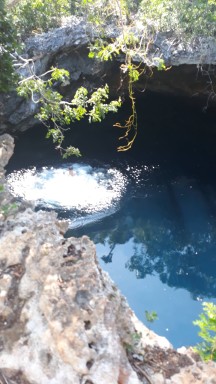 After the blue hole, we went on to Preachers Cave.  This, readers, is historically very cool. It seems that this is where the first descendants of Eleuthera came, although, not on purpose.  They shipwrecked in 1684 on the Devils Backbone.  This is an especially shallow area to the north and east of the island.  They sought shelter in the cave and this is where the first church service was held on the island.  There is a cemetery, it is unmarked and we were unable to find it.  This cave is pretty large and has several alternate entrances to the grassy knoll above. 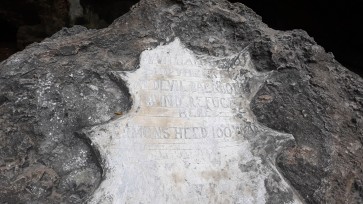 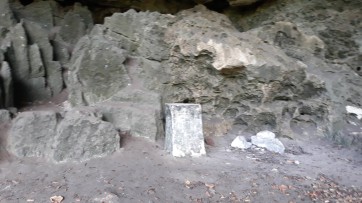 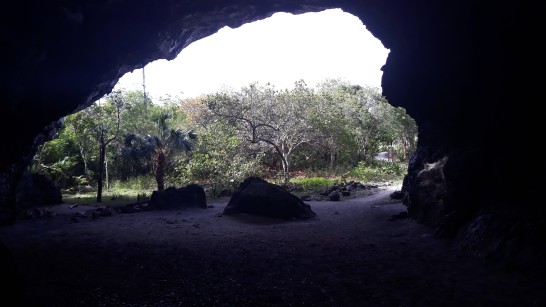 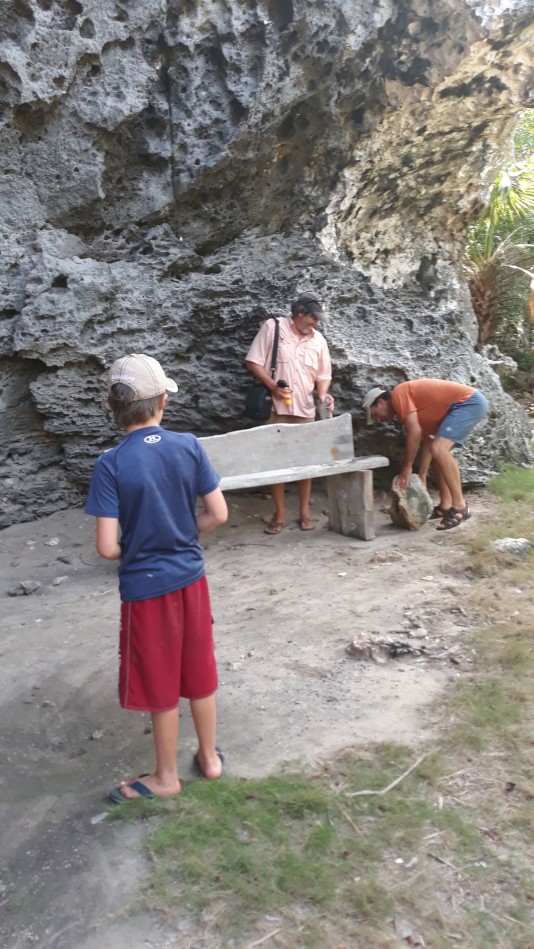 After the cave we wondered down a few other narrow roads and found some mangoes.

That night we made hot dogs on the beach.  It was our last night on Alabaster and we were a little sad.  This also marked our turn around point and from here on we are headed back to the states.

The next leg was making a turn towards New Providence.  This is where Nassau is, the Capitol.  We had no desire to go here (we have been vacationing there every year since 2005) while cruising.  It was, however, on the way.  We anchored at Rose Island.  The sea was bumpy and the anchor kept up the rolling.  When we were nearing Rose Island, Mike caught a fish, that when he pulled it in, had been partially eaten in the process.  We hadn’t had anything like this happen and were a little weirded out….  Also along the way, I had tea in my favorite cup from Lynn and read a little.  I was seasick for part of the day and the tea was comforting.

Tea in my favorite cup from Lynn. 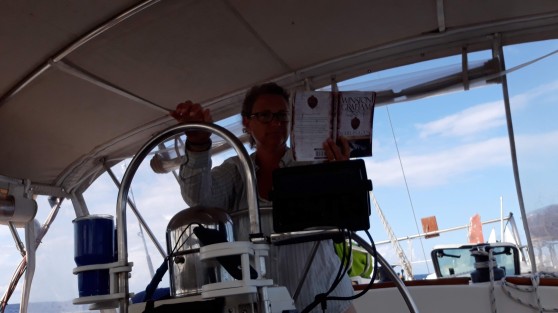 I’m not sure reading at the helm is recommended, but sometimes I do it, anyway.

The weather making the bumpy road.

We sit, now at Hog Cay.  Yesterday we explored Bird Cay and the fascinating story behind it.  This was owned by Francis Frances, who was a descendant of the Rockefeller family (Standard Oil).  He bought the house from his sister, Joe Carstair (now that’s an interesting story- look her up.  There is a book called The Queen of Whale Cay, which I intend to read about her.  Anyhoo- Frances and his wife built a mansion and essentially a compound here and made it their winter home.  Google Bird Cay and see the stories.  It is pretty cool.  The house could be made beautiful again with repairs (a lot of repairs) as it’s not completely ruined.  The bones still look good, to me 🙂  I didn’t get many pictures, mostly video and I haven’t gone through them, yet.  Stay tuned!

This brings me to my next point.  YouTube.  We have posted a few videos.  Let me tell you something…. if you enjoy a YouTube channel or two, appreciate the work that is involved.  It is time consuming editing a video!  It is also HARD!  So, that said, go visit our sight.  And be kind- it’s the beginning and it can only get better.  I look at comments on other channels and wander where people get the idea they are invited to criticize….  How about say something nice, or not at all..  Ok, enough.  Yes, I’m fearful of criticism.  There, I said it.  I’ll continue posting videos either way, as this is a good way for us to save them and show our families.  So there.  Enjoy:

Here’s the link for the latest episode.

My next post will likely be from Florida.  We either have 3 days to go, or straight through any of those days depending on the weather.  Pray for safe travel, if you are so inclined.  I will be flying Matthew to Sioux Falls and bringing my dad back in a week or so.  My brother, Jamie, is calling this the prisoner exchange.  Matthew likens it more to a hostage situation as he is very excited to be going home.  Dad will make the last leg with us.  I’ll be happy to see him, then anxious to get home to my big kids and grandson and the rest of the family.

One thought on “Alabaster Bay”