Over the last few weeks we have traveled a fair bit, not staying anywhere for very long.  I had a whole blog post written out, that wouldn’t upload due to poor data service.  Now, I can’t find that post- it’s lost somewhere in the laptop.  Oh well-  I had written it after a decidedly uncomfortable passage from one side of Great Harbour Cay to the other.   This was 2 weeks ago already!

We had checked into the Bahamas in Bimini on Feburary 14th after making a night passage from Miami.  We spent 3 days there, enjoying a spectacular beach (Radio Beach), getting some laundry done, eating from a street vender and just generally exploring.  We made several new friends, one boat, has 4 kids on board.  This was good for Matthew as he hadn’t had any kids to play with for a few weeks.  One of my favorite parts about Bimini was the sea glass we found on the beach.  I’ve never seen so much in one place!

From Bimini we headed to the North Berry’s.  We had a nice crossing on the 17th.  SV Woven, the  other kid boat also crossed.  They are on a catamaran and much faster than us.  We anchored on the west side, while they made it into the east.  The next day we made our way around the north end of Coco Cay, Great Stirrup Cay then down to the east side of Great Harbour.  It should have been a couple hour passage and ended up being 4 due to the sea conditions.  We had 6-8 foot swell and waves with only 6 or so seconds between.  It was uncomfortable, unpleasant and we were happy when we got into the bay and anchored.  We hadn’t plowed our bow into waves like that before and were happy nothing broke.  Voyager held up like a champ and kept us safe.  To keep my mind off the rough ride, I threw out my gratitude and listed my blessings to God.  He saw fit to help us pass the time a little more quickly.   We immediately took the dogs to shore and swam and played for awhile, on arrival.  It was good to be settled for the night. 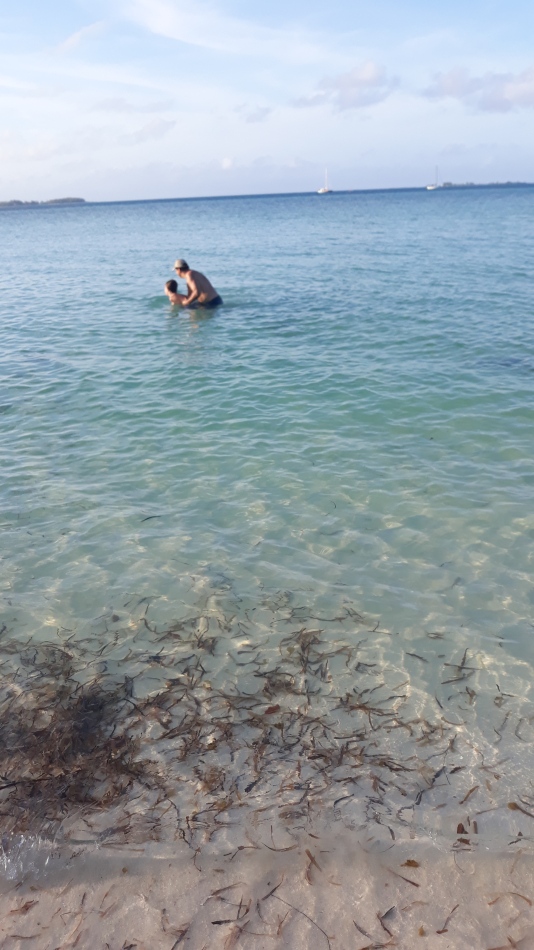 The next day, the 19th, after running the dogs and visiting with Woven we decided to make our way to Nassau.  We thought if  we were tired or conditions didn’t feel right, we would stop at the southern end of the Berry’s for the night.  As it turned out, we had decent conditions and made it to Nassau just after sunset.  And guess who was there?  SV VENTOLINES!  It was reunion time.

We initially anchored in the harbor near the cruise ships, the next day, we made our way to the anchorage by the marina where Ventolines was staying.  Eventually we were able to get a slip at the marina, or at least half of one….  There was a blow coming in on Friday and we were hoping to get in there.  The way it works is rather than a reservation, you call them and become a squeaky wheel.  On Friday morning Mike called at 0800.  Nothing yet.  He called at 1000.  Nothing yet.  He called at 12.  Yes, there’s room.  He may have also mentioned that our beam (the width of our boat) which is 13.5, is now 12 foot.  We aren’t sure if that was what got us a spot or if they really had one.  So, we moved with the tide.  As it turned out, the slip we got was one fit for a yacht with a 20 foot beam and 100 foot length.  There was already another boat there and we were to tie up behind them.  OK!  So, we did.  We were happy to have some security for the predicted winds.

We spent Saturday- Wednesday at the Atlantis, or mostly.  Jennifer, Wyatt, Matthew and I did, anyway.  The guys would come over to play and we had supper at the condo.  We have had a timeshare at the Harborside (part of Atlantis) for 15 years.  Matthew has claimed to have all his birthdays there, which isn’t far from the truth.  We have mostly come the first or second week of December.  So, it’s been either his or Mike’s birthday when we are here.  So, we were very happy to be able to use it this year as we missed out last year.  To have our friends, the Sivori’s join us was icing on the cake. 🙂

Since leaving Nassau the 27th we have been in the Exumas.  This.  Is.  Paradise.  Although, our first anchorage, Elbow Cay was rocky, rolly and overall miserable.  We slept in the cockpit, or the saloon just trying to get a few winks in.  Voyager was making so much noise with the rough anchorage we thought something would break for sure.  We managed to get through the night, then headed south to Samson Cay.

When we were in Miami before crossing over, we had picked up a piece of rigging for crew on Sea Paws.  They are friends of the Sivori’s and had been sitting in Nassau for weeks with a broke forestay.   So, we were able to get that delivered for them.  They crossed to the Exumas when we did and now we have 3 buddy boats in our flotilla.  They also have a dog, Willow on board.  She likes to bark at the dingys and jet skis like ours do.

Right.  Samsons Cay.  We stayed here for 2 nights.  We recovered from our traumatic night at Elbow Cay and found beaches and sandbars to play on.  The dogs were happy, we were happy and we met some other cruisers that topped it off.

Next stop, Staniel Cay.  You may have heard of this little island.  If not Staniel, then probably Thunderball Grotto.  This is the location of 2 James Bond films.   Thunderball, obviously and Never Say Never Again.   We snorkeled the grotto before leaving Staniel Cay yesterday.  We were anchored nearby, so dingyed over.  Ventolines was also there.  Sea Paws had gone the day before.  I was pretty hesitant about going in because I thought I would have to dive under and through a cave to get inside.  I had watched a few of our favorite YouTube channels when they went in and of course, they made it more dramatic.  So, it turns out at low tide, when we went, we were about to just swim in.  The lowest spot was about 6 inches above water and it was just a point that came down towards the water.  The land mass is volcanic rock that is sharp and jagged, so that is what you’re swimming through and under to get inside.  There are thousands of fish inside and the coral is so brightly colored.  There are many “holes” in the ceiling.  We know people have jumped in through the holes but there are signs discouraging that.  The ceiling height is probably 25-30 feet, so the distance gives plenty of room for the sunlight to stream down and add to the experience.  Unfortunately, our Go-Pro was dead when we got there, so we didn’t get any pictures.  I will be requesting some from Jeff so I can share them.

After snorkeling, we made our way a few more miles south to Black Point.  This is a very popular place for cruisers.  What we know so far is that Miss Ida at the laundromat not only does the laundry but gives the best haircuts in the Exumas.  Matthew may give her some business later today.  Our first trip to shore, to find the lay of the land, we asked a couple children heading home from school where we could find some ice cream.  They directed us to a house that sat back from the road.  The resident there sold us some Blue Bunny ice cream from a small room outside her house.  We got 3 cones for $6 and felt like we got a heck of a deal.   There are 4 restaurants.  One of them, Scorpios, offers a cruisers happy hour 3 nights a week.  Not only do they offer 2 for 1 drinks, but very, very affordable food options.  This is a big deal!  We had 3 appetizers Carribean Chicken, conch fritters and loaded fries and it came to under $40.  The same thing, the night before in Staniel was $80.  You can imagine how welcome this is.  We are usually very frugal when cruising.   This season, however, we are trying to be more supportive of local entrepreneurs thereby supporting the local people.  So, we are eating away from the boat more often.

So, we go to get back into Meg, the dingy, to come home last night at dusk.  We look down and there are 2 nurse sharks laying on the floor under the dingys.  This was a little unsettling, but they are harmless.  We got home and settled and Mike started the generator to run the fridge and watermaker.  Since nothing had broken in our adventures so far, I guess it was time.  Our generator is now only giving us 90 volts.  We need 110.  We are now trying to come up with a solution.  Sea Paws is lending us a portable generator to run our fridge today.  Mike is trying to troubleshoot with people he knows that have some knowledge of generators and researching online.  We have a few spare parts and are hoping that it may be one of those that is the problem.

This will bring you, our faithful readers up to speed.  I’m hoping to be a little more diligent in writing.  We seem to have spent so much time on the go that I haven’t taken the time to sit at the laptop.  I will however, try to get a few more pictures up.  If we, at some point get a little better wifi service, I will definitely post more often and get some more pictures up, as well.

One thought on “A Smooth Sea Never Made a Skilled Sailor”