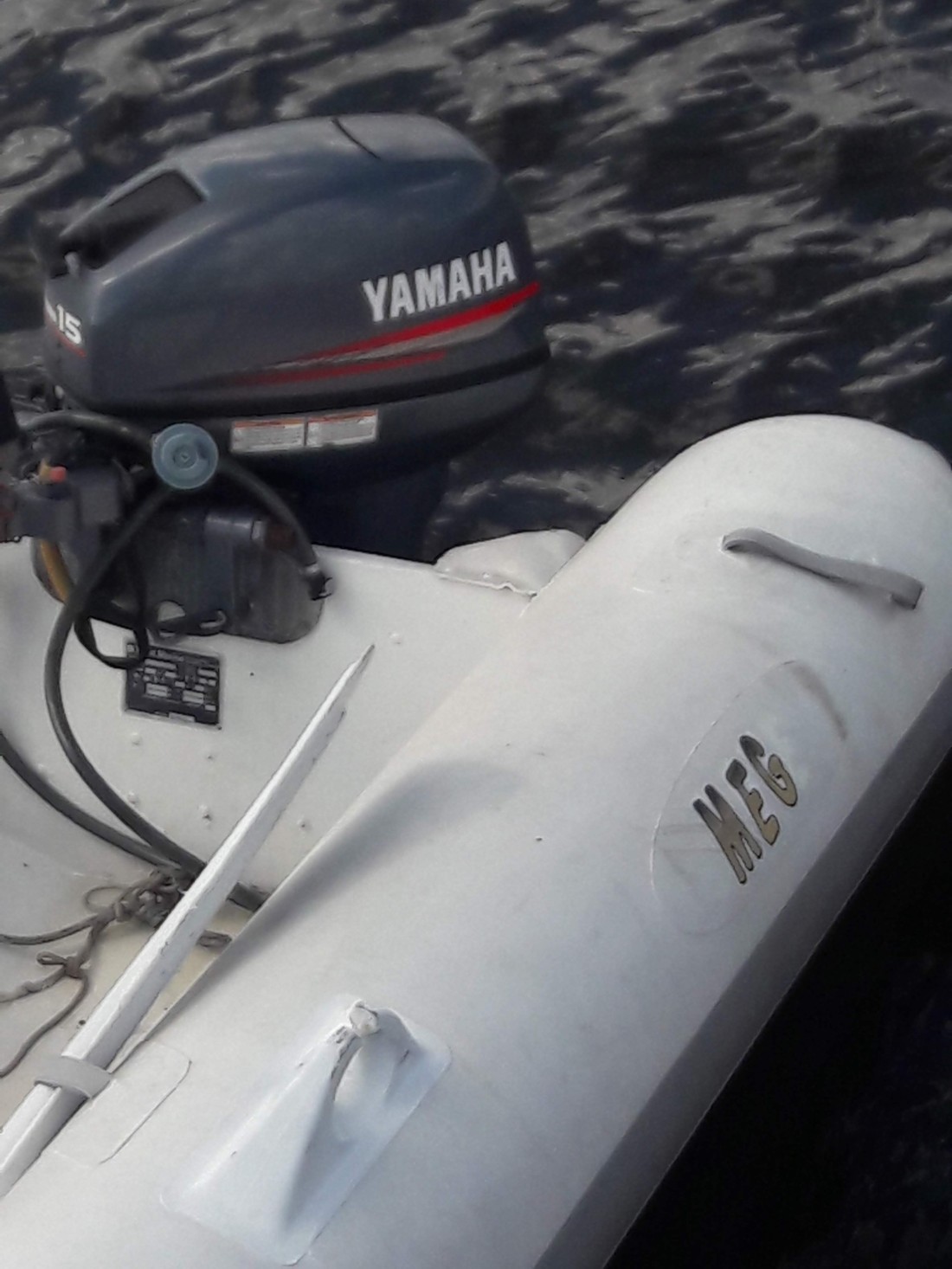 I seem to have gone the rest of our trip without documenting anything…..and the best part was that we actually got out there and raised sails and sailed back to the marina at sunset!  This was something so exciting and I didn’t record it…. But I am now.

So, our attempted and aborted sail was on Saturday, I believe.  Mike spent the next 2 days replacing all the fuel lines (25 feet) and fuel filters (6)  and becoming intimately acquainted with Voyagers nether regions.  He also polished the fuel tanks to remove all the water and debris.  When there is water in a diesel tank nasty bacteria will grow making a black slime which plugs fuel filters.    I had spent a few hours cleaning out the inside of the small diesel tank.  This was no small feat, as I had to maneuver through a 10 inch wide locker and through a 6 inch hole into the tank.  My upper arm was very colorful with bruising by the time I was done.  Mike also fixed the tach and replaced the engine shut off switch which

was no longer working.    I spent one entire day swabbing (happy John?) the deck and drying out deck lockers.  I dropped one of these lids on my foot and bruised my right big toe.  After that, I had managed to add purple color to each of my 4 limbs.

The windlass still wasn’t working, nor the tachometer, but we headed out again on Tuesday the 7th to sail.

We motored out past the bridge, turned her into the wind and pulled up the main sail.  There is nothing like the feeling when you feel the lift as the wind grabs the canvas!  It’s something like when an elevator makes it’s ascent, the sensation of weightlessness that is so brief, but tickles your insides.  We had about 6 knots wind at the time, but as we navigated the channel, were up to 16 knots, at times.  We wound through the channel markers and got as far as the opening to the North Atlantic (SQUEEEE!).  We decided to turn around as we were afraid of making our way back after darkness fell.  This also meant we were headed west as the sun set.  These conditions made for a beautiful return into the marina.

On Monday I had met a woman, Tracy, hanging signs on the bathroom doors for a Bible study to be held on Tuesday evenings at 630pm.  We didn’t make it to the study as we were late coming back from our sail.  However, we had agreed to sail with Barefoot Pete the next day, Wednesday and were surprised to see that Tracy and her husband Tommy were also aboard Pete’s boat.  He has a 37′ Hunter that is beautiful and soo different in appearance to Voyager.  We were given our safety tutorial and set out.  We hadn’t been on a boat with an” in mast” furling, so it was fun to see how that worked.  The sail actually took us out into the ocean and we were able to swim off his sugar scoop swim platform for awhile.  Pete had thrown a rope and flotation pillow out, but it was pulled under the rudder as the boat drifted.  I had no visibility when I looked and am NOT a diver.  Fortunately Tommy is.  He was able to free the rope and we continued swimming for 30 minutes or so.  There were a few jellyfish that would float by and with Matthew’s experience our last trip, he was hesitant to go in.  He finally did for a few seconds and was pretty pleased he got that far.  As we headed back, the main clew came unbound from the furling in the mast.  Tommy was able to rig it back so it could be furled in and we motored back.   Overall this was a most enjoyable day.

We decided to have sushi for supper when we got back and went to Basils.  Several people had recommended it and they didn’t disappoint.  We asked Peter (former Voyager owner, not Barefoot) to join us and he did for take out and some conversation.  We enjoy his company immensely and were glad he joined us for awhile.

The dingy was something we finally got to on Thursday.  She had some old gas and we got that sorted and she ran like a champ.  Her name had been Dove, we renamed her Meg.  I was able to get the old decals off the boat and her new name is now Voyager and the decals are on.  We had a brief, private christening ceremony for both the boat and dingy that Thursday night after all the decals were up as we want to keep Neptune happy 😉

Wednesday and Thursday were full of hurricane prep.  We pulled down, dried and folded sails.  Lashed halyards, cleaned and stowed the dingy.  It seems like so little to write it out, but it was time consuming.  We brought home the bimini top so Mike can make the flaps to hold the flexible solar panels.  We will be adding more solar, but this is a start.  He also has 2 sheets of ising glass panels to repair that are part of the enclosed cockpit.

In other news, Mike and I went to see The Spy Who Dumped Me.  Sam Heughen is in it and as a fan, I had to go.  It was such a funny movie!  We don’t get out just the 2 of us often, so it was a special treat!  Matthew and I also got Mike to use one of the marina bikes and ride with us to the pool one day.  He chose a light pink road bike and made it look macho and manly!  HAHA!

Our plan now is to head back the end of September and take a few more items.  I had taken our sails to a sail maker in Jacksonville to be repaired and inspected.  We will pick those up on our next trip as well.  The question will be whether we put them up or not, depending on how the remainder of hurricane season is looking.  It would be disappointing to go and not be able to sail.  I’m hoping my dad is able to join us then, as well.  He would enjoy the sail and I would hate to disappoint him.

I think I need address provisioning and what we are taking on board in our next post.  This is something that weighs on my mind several times daily.  If anyone has suggestions, or can offer expert advice, we would welcome it!